Exciting news to share: after a 3.5-month statewide and national search process, with tremendously valuable input from partners and county party leaders throughout the state, I’m thrilled to announce that the Democratic Party of Wisconsin has hired our next Executive Director, Nellie Sires!

Nellie, a powerhouse organizer, campaigner, and leader originally from Nebraska, is currently the Vice President for Training at The Management Center, the premier progressive and Democratic management training organization. Before accepting the position with us, she had been slated to run the initial training for new state party executive directors—a training that she helped write. 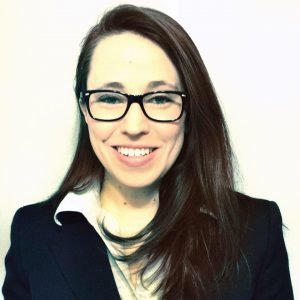 Now, she’ll be an ED herself. Previously, she’s served in a variety of campaign roles at the DCCC, on statewide campaigns, and on Obama’s 2012 reelection. At The Management Center, she has trained thousands of progressive leaders, including the Democratic Party of Wisconsin’s staff, on managing to win campaigns; diversity, equity, and inclusion; and building high-performance teams.

Nellie represents an expansion of our current leadership team, all of whom will stay on with DPW. I’m tremendously grateful to our two current executive directors, Breianna Hasenzahl-Reeder and Devin Remiker, for their leadership of the party thus far—and for their eagerness to continue with the party in senior leadership roles going forward.

We were delighted by the tremendous and diverse candidate pool—thanks to all who referred candidates or who applied. Nellie deeply shares our values around including and respecting everyone, and has organized in rural areas, communities of color, suburbs, and cities alike. She’ll be consulting with us for the next two months as she completes her previous training commitments, and begins full-time in January. Please join us in welcoming her aboard!

Meanwhile—we’ve got a lot of organizing to do. Read on for updates about our last week, and make sure you sign up to join a canvass for the 1 Year 2 Win organizing push next weekend, November 2-4. You can do it here: wisdems.org/2020

When the VP Comes to Town…

When Mike Pence came to Wisconsin this past Wednesday to speak at a warehouse owned by Dick Uihlein, an ultra-wealthy GOP donor, we made sure he was greeted by a loud and proud group of labor and community leaders who called out the failures and broken promises of the Trump administration. 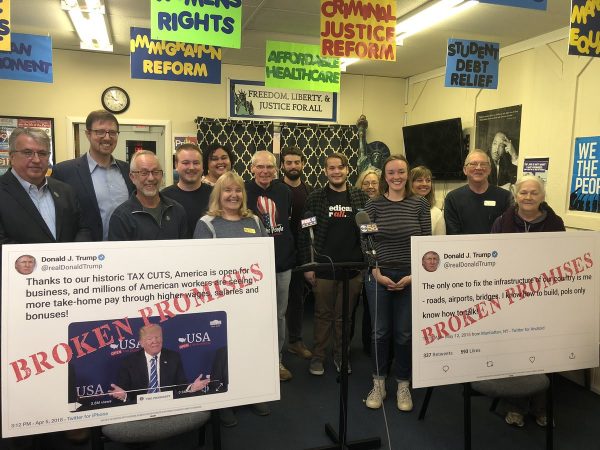 Here’s what our speakers had to say:

Ben Wikler, DPW Chair: “Our state is facing a crisis — and it’s because of Donald Trump’s broken promises to all of us.  He barnstormed our state in 2016, claiming left and right that he was the one to deliver an infrastructure package that would fix our roads and bridges, that working families would see their wages go up, and that our economy would continuously grow exponentially. This has proven to be nothing more than a laundry list of broken promises and Wisconsinites literally can’t afford another four years.”

Rep. Greta Neubauer: “Voters in Wisconsin weren’t asleep in 2016 — the majority believed that he meant what he promised — that he’d bring back manufacturing jobs, that he would have the backs of working people and not the CEOs of giant corporations, and that communities like ours would be revived. He broke every single one of those promises.”

John Drew, Former UAW Local 72 President: “The labor movement is about people standing up for better wages, benefits and working conditions. Trump ran for President promising that he would take care of working people, but just like everything else he promised, it was a lie. And Trump and Pence have been on a broken promises tour ever since. This will continue and get louder and louder until November 2020. But working people can’t afford four more years of broken promises. We need a President who will hear our concerns and keep their word—–not someone who sells us out.”

After years of the GOP refusing to acknowledge the epidemic of gun violence in our communities, Gov. Evers took the bold step on Monday to demand legislators convene in a special session to consider two popular pieces of gun safety reform — universal background checks and red flag laws. 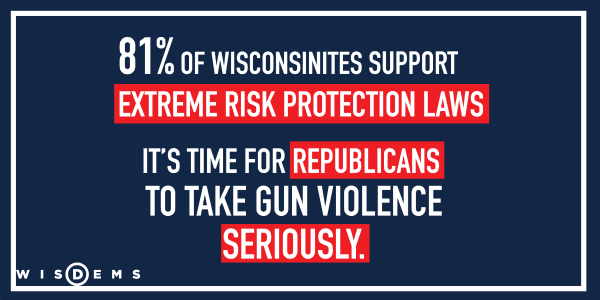 Not only do both measures have broad public support (over 80%), they’re also supported by a vast majority of Republicans and gun owners! But Sen. Scot Fitzgerald and Rep. Robin Vos care more about being obstructionists than they do working to solve the pressing issues of our time. They would rather play politics with their constituents’ lives than work with Gov. Evers to pass this sensible, popular legislation.

By law, Republicans are obligated to gavel into session to consider these bills (but Sen. Fitzgerald has already announced that the Senate will immediatley gavel out). Democrats are with the public on this issue, and it’s about time Republicans felt the backlash from ignoring the will of the people. Start here to take action.

DPW in the News

Our communications team generated a number of amazing pieces in national press this week on our work here in Wisconsin:

LA TIMES: The 2020 presidential race already in full swing in Wisconsin: “It’s more than a year before the presidential election, but across the state of Wisconsin it could be fall 2020. Dozens of Democratic volunteers were combing neighborhoods to knock on doors in La Crosse and Whitewater on a recent cloudy fall weekend, while volunteers worked phone banks in Milwaukee”

Cap Times: Shaky ground: Amid hardship and uncertainty, some in Trump’s rural base are having second thoughts: “Losing in America’s cities, Trump was handed his 2016 victory by the nation’s rural voters. And if he’s going to win in 2020, maintaining that support is crucial…Some farmers have already soured on him. “I changed my stance,” said Jerry Volenec, a fifth-generation dairy and Angus beef farmer in Mequon. “If I don’t voice my disagreement, it’s assumed that I agree. And I don’t agree with the direction that agriculture is going in the United States.”

CNN: Wisconsin Industrial Jobs on the Line as Trade War Drags On (VIDEO) 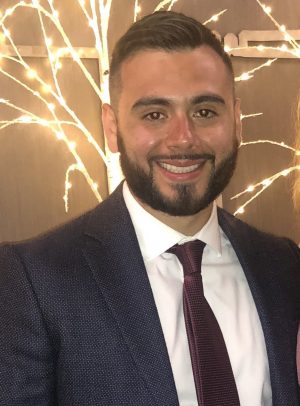 Meet David Aguayo — DPW’s new Finance Manager! David is committed to empowering underrepresented communities. From his first internship with the Wisconsin State Public Defender, through his current role, he has served as an advocate for their needs. He graduated from the  University of Wisconsin – Madison with a BA in Legal Studies. Upon graduation, David worked at the Wisconsin Department of Justice before moving to Washington, D.C. in 2016. In D.C., he worked in the U.S. Federal Trade Commission’s Legal Department, while concurrently serving as an appointed Commissioner on the Mayor’s Latino Community Development Advisory Board and interning on the Hill for Congressman Pocan.

Since returning to Madison, David has maintained his involvement in politics. David was Campaign Manager for Kaleem Caire’s School Board run and worked in Governor Evers Administration as an Executive Assistant in the Office of the Secretary at the Department of Workforce Development  – headed by Secretary Caleb Frostman. Mr. Aguayo now brings his wealth of experience and skills to the Democratic Party of Wisconsin as Finance Manager. David lives in downtown Madison with his wife Kristin and two Siberian Huskies Khaleesi and Aegon.

Ben had a great night at the Milwaukee NAACP Freedom Fund dinner at the DPW table with President of the Milwaukee 2020 Host Committee Liz Gilbert, DNC Member Martha Love, and Milwaukee County Dem Chair Chris Walton! Lt. Gov. Mandela Barnes kicked off the night by pointing out which party had made an effort to show up and which hadn’t. 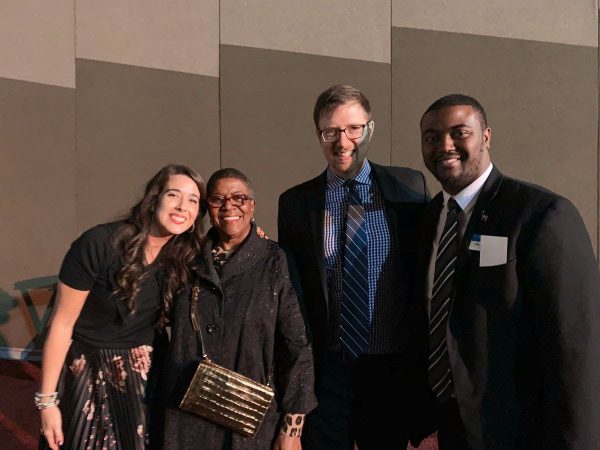 We’re just one week away from #1Year2Win, when we’ll be exactly one year away from the 2020 general election. With so much at stake, we can’t waste any time.

That’s why we’re organizing like it’s October 2020. And we need your help talking to voters. If you haven’t already, sign up for a canvassing shift for November 2-3, and bring a friend!

Trump won Wisconsin by only 22,000 votes in 2016. We can’t take any vote for granted, which means we have to start organizing NOW if we’re going to stop a second Trump term. 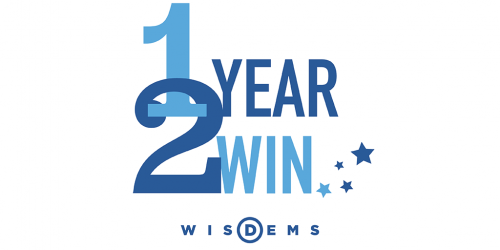 Other Ways to Get Involved

And finally, a(nother) reminder to sign up for a canvass for #1Year2Win.

Find an event near you here!