After Democrats swept every statewide election last year for the first time since 1982, Republicans took a hard look in the mirror. They’d spent heavily on digital ads, and TV. But, they realized, they came up short on the strategy that Democrats used to win: grassroots organizing.

The bad news is—now they’re copying our grassroots model. Which means we’ll have to work even harder.

I met the chair of the Republican Party of Wisconsin this week, when he and I spoke on a panel organized by WisPolitics. You can watch the video here. [NOTE: WisconsinEye says they’ll post the video tonight.] During the discussion, RPW chair Andrew Hitt explained that they’re copying the Obama-inspired model of organizing neighborhood teams. 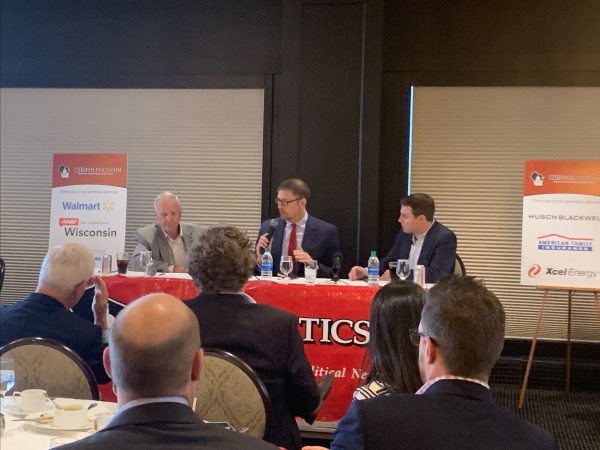 Yes, it’s more than a little ironic that the party that once mocked Obama for being a community organizer is now trying to steal his tactics.

But more than that, it’s a reminder that we can’t take anything for granted in 2020. We’re racing to leapfrog the GOP on data, digital strategy, communications, and technology. And we have to run even harder to extend our lead in grassroots organizing. This weekend, we’re going to knock our 200,000th door of the year—an unprecedented field effort more than a year before the election. But all of this and more will be necessary, because we have to expect Trump and the GOP to use tactics we’d never touch—such as publicly welcoming foreign interference in our elections.

As I said on the panel, we have to expect the 2020 election to come down to a razor-thin margin. But if we do everything we can do, if we don’t take anyone for granted or write anyone off, we’ll not only win—we’ll build the kind of party and movement that can change Wisconsin for the long term, for the better.

Proud to fight by your side, 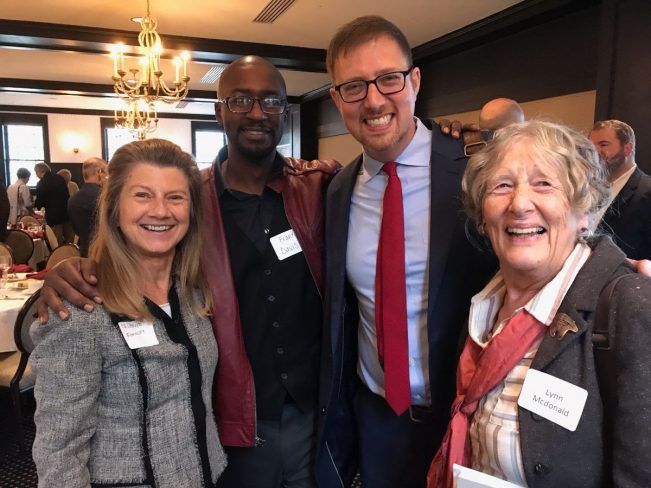 PS: Thanks to all who came to the WisPolitics event—and in particular to Vice Chair Felesia Martin, 4th CD chair Terrell Martin, and to my friend Frank Davis, community organizer with MOSES, who joined my mom, Lynn McDonald, and DPW activist Melanie Foxcroft at the lunch, and who challenged both parties to do more to reach out to people of color and marginalized communities. It was an invaluable question that helped center the conversation on creating a politics that values every person and includes every voice.

What do you call a state Senator who’s a shill for mining and chemical companies?

The infamously unelectable Toxic Tom Tiffany announced his bid for the 7th congressional district this week, and we made sure everyone knew just how wrong he is for Wisconsin.

We launched ToxicTomTiffany.com and accompanying digital ads to highlight his record of writing legislation for polluters, slashing health care for seniors, and raising taxes on the middle-class to give wealthy corporations huge tax breaks. 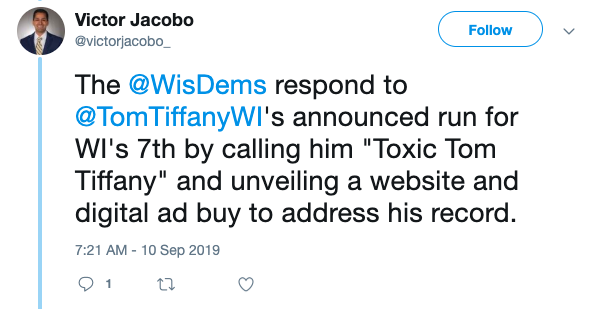 We know Republicans love gerrymandering, but it’s hard to gerrymander your way out of a record like that. They couldn’t find a candidate more unelectable if they tried.

The special election for this seat (the date of which will be announced later this month) is going to be an uphill battle. But with someone like Tom Tiffany as the Republican front runner, we stand a better chance at making gains in this very red district.

And we have the perfect opportunity for you to get involved. 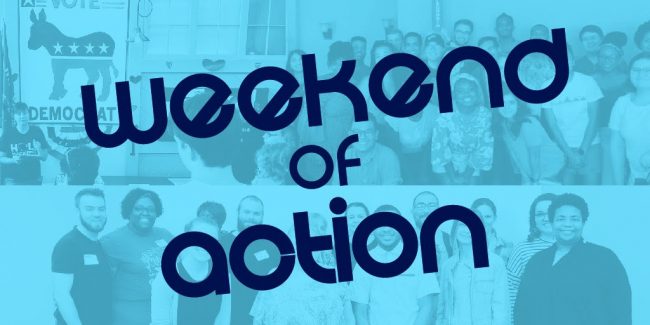 This weekend and next we’ll be launching canvasses all across Wisconsin for our Weekend of Action. If we’re going to win this special and in November, we have to get to work now. No vote can be taken for granted.

Even if you don’t live in the 7th CD, we hope you’ll join us this weekend as we talk to voters about the issues that matter in their lives.

Our Communications Department needs your help. We’re recruiting a statewide network of spokespeople who can speak to how Trump’s broken promises and failed policies have hurt hardworking Wisconsinites.

Who we’re looking for: everyday people who have a story to tell and would be comfortable talking to the media. We’re looking especially for folks with health care stories (ie: they have a pre-existing condition), agriculture/farming stories (ie: a dairy farmer who’s been harmed by Trump’s trade war), and general stories on the economy (ie: someone whose job was shipped overseas, or who’s seen their wages decrease during the Trump presidency). Additionally, we are also looking for folks who voted for Trump in ’16 but plan to vote blue in 2020.

Ben on spoke on a panel at Roosevelt University about activism and grassroots change last week, alongside Sheerine Alemzadeh of the grassroots group Healing to Action. Ben spoke about the links between activism on issues and electoral fights. You can watch the video here. 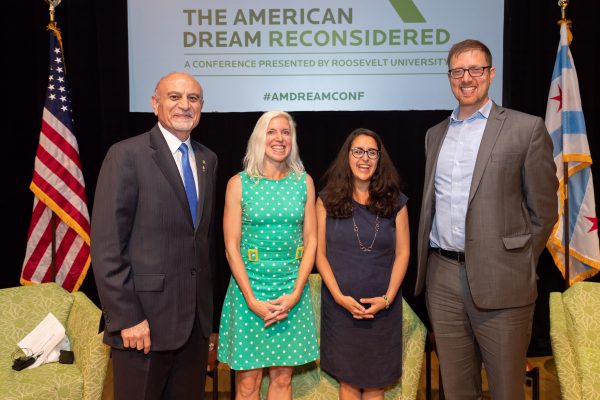 Fighting in the Suburbs

Our freshman Rep. Robyn Vining hosted a round table with suburban moms in partnership with the Democratic Party of Wisconsin this week to talk about the issues facing her community in Wauwatosa, including health care, common sense gun safety reform, and the lack of leadership coming out of the White House — not to mention the ever growing list of Trump’s broken promises. 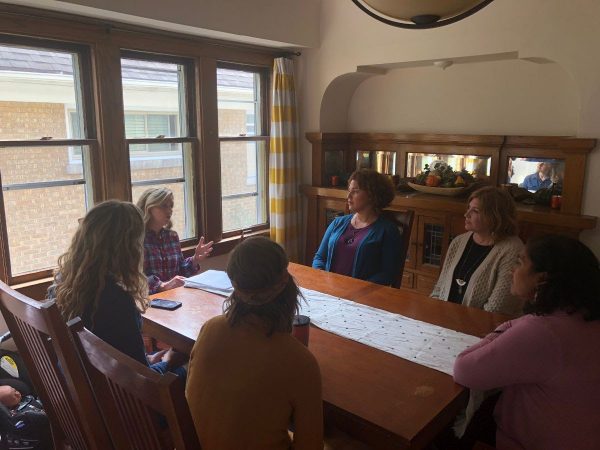 Turning Up in Western Wisconsin

In order to win in 2020, we have to fight everywhere, rural, urban and suburban alike. We must organize every square inch of the state to turnout and vote blue. Our nation’s future depends on it. 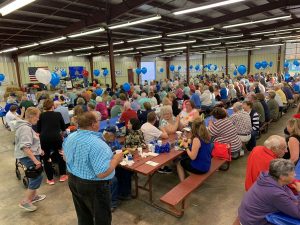 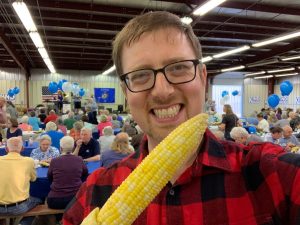 Join local volunteers and activists at one of our upcoming regional organizing trainings! These events are open to anyone who is passionate about strengthening the progressive fabric of Wisconsin, regardless of volunteer experience. 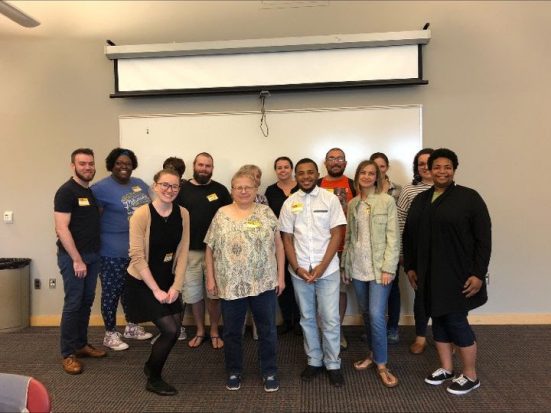 We had a great turnout at our Milwaukee training last weekend!

**This weekend we’ll be knocking doors as part of our latest weekend of action!** 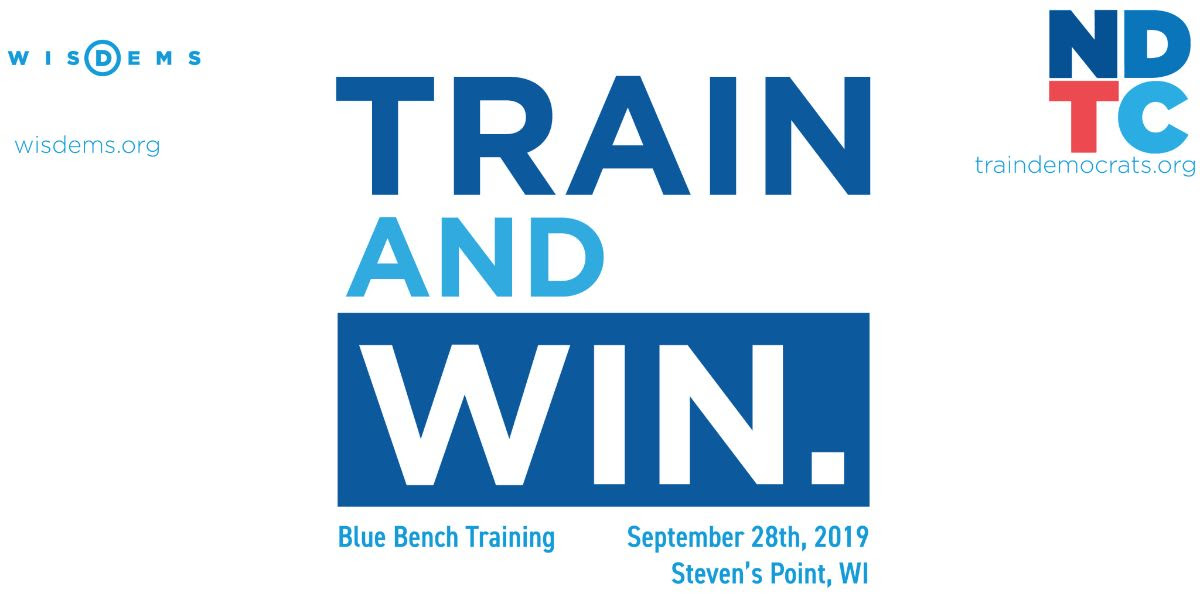 Emerge is a groundbreaking organization that recruits and empowers Democratic women to run for office by giving them the tools and support they need to become future leaders in their communities, and they’re accepting applications NOW! for their class of 2020. In 2019, over 80% of Emerge trained women won their elections across Wisconsin. Learn more here! 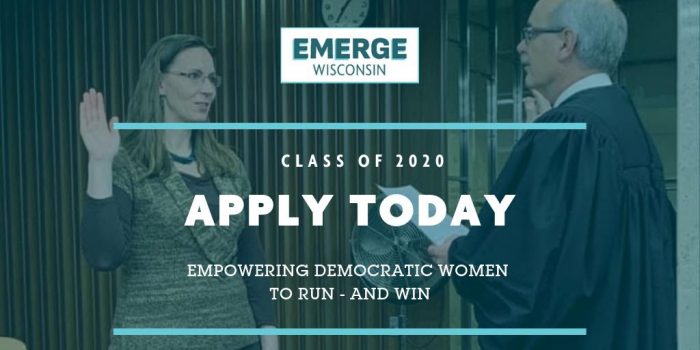 Ben will join Milwaukee Dems at their monthly meeting this coming Monday, September 16.