This weekend, our county parties and neighborhood action teams will be launching canvasses in more than 100 locations across Wisconsin. This map brings a smile to my face: 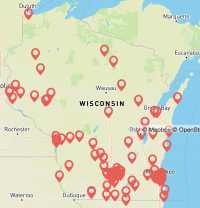 If there’s a canvass launch near you, hit the streets tomorrow! If not, there will be plenty of times in coming weeks to get organized.

So it’s our job to make sure Democrats know that Dan Kelly was appointed by Walker, endorsed by Trump, and constantly sides with polluters over people, Republican partisans over fair maps, and the NRA over gun violence victims. He’s about as impartial a Justice as Mitch McConnell in the impeachment trial—a right-wing operative in black robes.

The Wisconsin Supreme Court, which has ten-year terms, will rule on issues affecting the presidential election and the future of every Wisconsinite. So let’s mobilize for April 7 as though the future of the state, and the nation, depends on it. Don’t let the national news cloud your vision: we have the power to make a difference, right here, right now.

When we fight, we win.

Glad to be with you in this fight,

FIGHT on the Issues & FIGHT to Win:
President Trump’s Final
State of the Union

President Trump gave his State of the Union this Wednesday, and as expected, it was filled with blatant lies and empty promises.

But Wisconsinites know better. We know he’s going to continue trying to take away protections for people with pre-existing conditions while refusing to sign legislation that would lower prescription drug bills. We know that he’ll pretend that our farmers are doing well and ‘over the hump,’ in the midst of a devastating dairy crisis that he exacerbated.

Wisconsinites can’t afford four more years of Trump’s broken promises, which is why we are working so hard to make sure this is the last State of the Union Address that this president ever gives.

On the day after Trump’s State of the Union address, 52 U.S. senators voted to acquit President Trump on the charges that he abused his office — the most powerful in the world — to coerce a foreign nation, an ally, into helping him win reelection. The facts presented by the House managers were abundant and damning: Trump acted in his own interest, in defiance of the Constitution and in obstruction of Congress, and put our country at grave risk.

But at the end of the day, 52 Republican U.S. senators (and yes, that includes Wisconsin’s National Embarrassment Ron Johnson) decided to put partisan politics over conscience, and more importantly, over the Constitution and the American people.

Now it’s on us — as Democrats, as Wisconsinites and as patriots — to mobilize to ensure that no other President feels emboldened to conduct themselves in this manner again.

That’s why it’s so important that, this November, we hold Donald Trump accountable and vote to remove him from office. It’ll be the hardest fight of our lives, but one well worth the effort. For the next nine months, Wisconsin Democrats will be doing everything we can to win this crucial state and protect this country for our children. We hope you join us.

What’s Best for Our Kids

Meanwhile in Wisconsin, Governor Tony Evers called a special session of the legislature to take up a proposal that would invest an additional $250 million in public education across the state, getting us to two-thirds funding for our public schools, while providing $130 million in property tax relief at the same time. We’re able to do this thanks to unexpected revenue from a budget surplus. 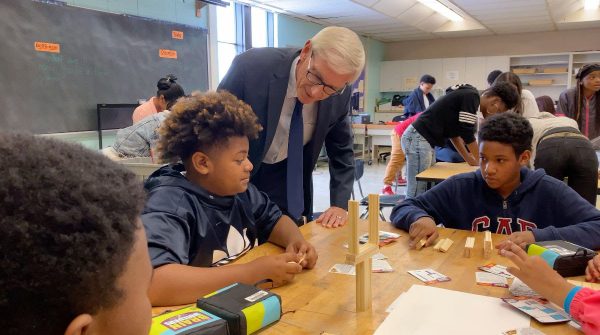 Republicans have of course already voiced their opposition. What’s funny though, is that Speaker Vos coauthored a bill in 2009 that also provided two-thirds funding to Wisconsin schools. So what’s different this time? Well, Tony Evers is governor now and Robin Vos can’t put aside his petty politics for one minute to do what’s best for our kids.

What’s best for our kids is what’s best for our state. The governor is proposing a critical investment to ensure that our students have access to high quality public education and that our schools are able to recruit and retain the best and brightest teachers. We hope that Speaker Vos and other Republicans will put politics aside and provide the support to our communities that they need now.

INCLUDE & RESPECT:
Respect in the Workplace

Nobody should ever have to work in an environment that isn’t safe or doesn’t make them feel valued. We applaud the staff members who had the courage and bravery to speak up. And we’re grateful to the committee’s board for taking swift and decisive action.

Now we can move forward and make this convention a spectacular success.

You can check out the positions on our job openings page.

The Democratic Party of Wisconsin is an equal opportunity employer. Women, People of Color, LGBT, people of all religious affiliations & people with disabilities are encouraged to apply

EMPOWER the Grassroots:
60 Days to Victory

Momorrow, we’ll mark 60 days until our Spring elections with the first day of a weekend of organizing, filled with 48 hours of action packed door knocking and phone banking.

These elections are crucial to a progressive future for Wisconsin. Our 2020 nominee for president, a Supreme Court seat, and local elections across the state are all on the ballot.

Dan Kelly is a GOP partisan operative disguised as a Supreme Court justice. With issues integral to our democracy coming before the Supreme Court over the next few years, we need to have a Supreme Court that is fair and impartial. If we want a government that works for all Wisconsinites, winning in April is the first step.

We need your help to make this a success. These elections will be decided by face-to-face connections and a strong ground game. So if you have a couple of free hours tomorrow or the day after, visit www.wisdems.org/victory to see how you can get involved. 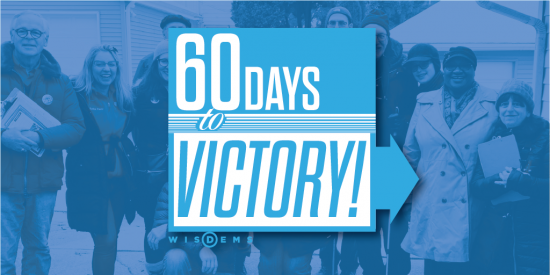