Yesterday, I spent an hour with the future: a room jammed with college students and recent graduates training to become field organizers in the 2020 showdown that will end the Trump era and launch the start of something better. 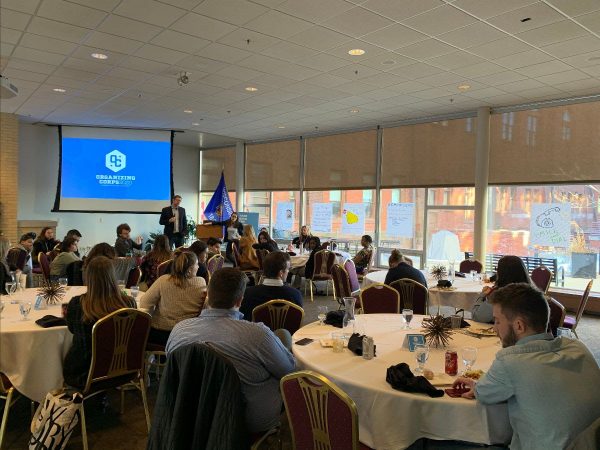 The room was the Organizing Corps 2020 winter boot camp, organized and run in partnership with the Democratic Party of Wisconsin. The trainees—some of them county party activists from across the state—were diverse, brilliant, and driven. Soon, I hope, many of them will be on the Democratic Party of Wisconsin team. And hearing them talk, you could tell that they’ll be in the fight for justice for decades to come. 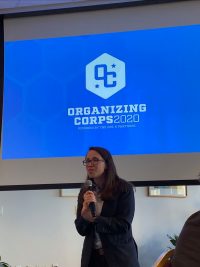 The way we’re going to win in 2020 is by building a multigenerational movement for change. It’s going to take all of us.

These can be dark times. But meeting people who are taking wing reminds you that, together, we can soar into something brighter.

You can meet some of the trainees by clicking here to see the #OC2020 hashtag on Twitter. And, soon, you’ll see them at county party events, canvass kick-offs, and neighborhood team launches across the state.

If this week was any indication of the year to come in Wisconsin, we are without a doubt going to be the center of the political universe in 2020.

President Trump kicked off his year of campaigning for re-election in Milwaukee this week with a meandering word-salad of a rally. Instead of addressing the issues that keep Wisconsin families up at night, he rambled about light bulbs and toilets (literally). 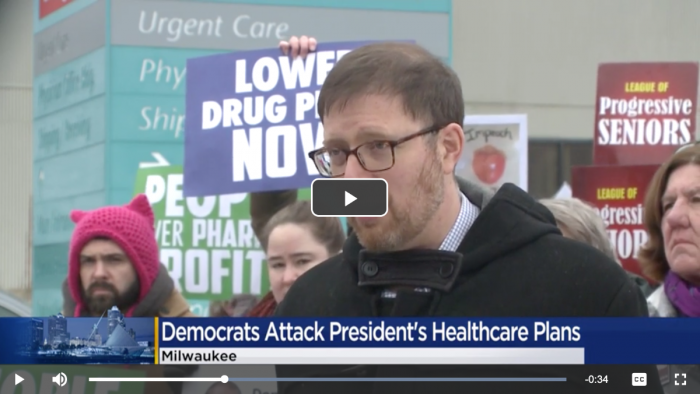 Meanwhile we at the Democratic Party of Wisconsin gathered with Milwaukee Mayor Tom Barrett and 5th CD candidate Tom Palzewicz ahead of Trump’s rally to call out his broken promises on health care — the number one issue we hear about from folks on the doors.

The harsh reality is Wisconsin families are struggling now more than ever to afford skyrocketing health care and prescription drug costs. While Trump promised to make our health care more affordable and accessible, he’s done the exact opposite. Right at this moment, his administration is suing to invalidate the Affordable Care Act, a move which could jeopardize health care for millions of Wisconsinites with pre-existing conditions. 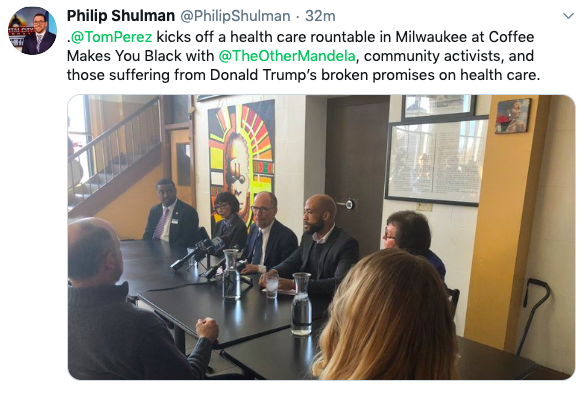 If you tuned in to Trump’s rally on Tuesday night, you heard Trump give a vision for our country which is dark and cynical, which pits us against each other and sees unity and acceptance as weaknesses.

But if you tuned in to Tuesday night’s Democratic debate, you heard something much different — a hopeful, optimistic vision for America in which our government wants to help its citizens and treat them with decency and humanity instead of hurt them.

The contrast between our Democratic field and Trump couldn’t be more stark. While Trump was in Wisconsin ranting and raving, Chair Wikler made a special trip to Des Moines, IA for the latest Democratic presidential primary debate (which aired at the same time). He spent time updating national reporters about the state of play in Wisconsin. While Iowa may have the nation’s focus right now, the spotlight will be on Wisconsin sooner than we realize.

Defending the Rule of Law —
and Winning the Supreme Court Race

At his rally, Trump endorsed right-wing operative Dan Kelly for Wisconsin Supreme Court. As we head into the spring elections, it’s imperative that we remind voters what’s at stake in the Supreme Court race.

Dan Kelly is a partisan hack through and through. He’s spent the last few years on the Supreme Court doing the bidding of right-wing special interest groups, deciding how to rule, not based on the rule of law, but by his own corrupt partisan interests.

The Supreme Court will rule on some of the most important issues of our time — particularly redistricting. If we have any hopes of overcoming the GOP’s stranglehold on our democracy, we need to win April’s Supreme Court race.

Trump knows that the only way he can win Wisconsin is by suppressing the vote. You can see that in the attempted voter purge—which is currently on hold, thanks to a stay from the Wisconsin Court of Appeals issued on Tuesday, but could resume at any moment.

If the purge goes through, we’ll get the list of purged voters and leap into action, contacting and re-registering voters. But we’re not going to sit on our hands until then. This week, we launched a partnership with Stacey Abrams and her amazing organization, Fair Fight, to build a bigger, stronger, and more extensive voter protection team than the state has ever seen—starting now. See Stacey Abrams explain the partnership here:

And if you want to chip in to help us take this plan to scale, click here to chip in now!

For more insight into the implications of the voter purge and the long history of GOP voter suppression in Wisconsin, read Chair Wikler’s op-ed published on CNN last month!

INCLUDE & RESPECT:
Join the Growing DPW Staff
Come Work with Us!

You can check out our job openings page on newly re-designed website, which launched this week! 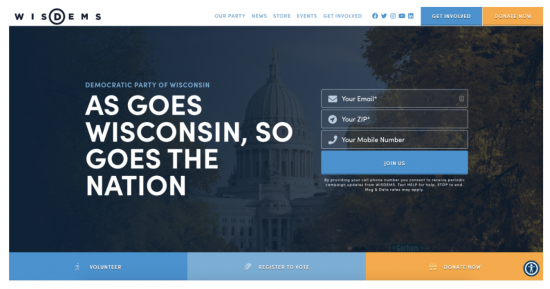 EMPOWER the Grassroots:
Team of the Week

Welcome to a new installment of the Weekly Chair’s Update where we’ll spotlight a new team or volunteer in Wisconsin doing great work to get Dems elected in 2020! 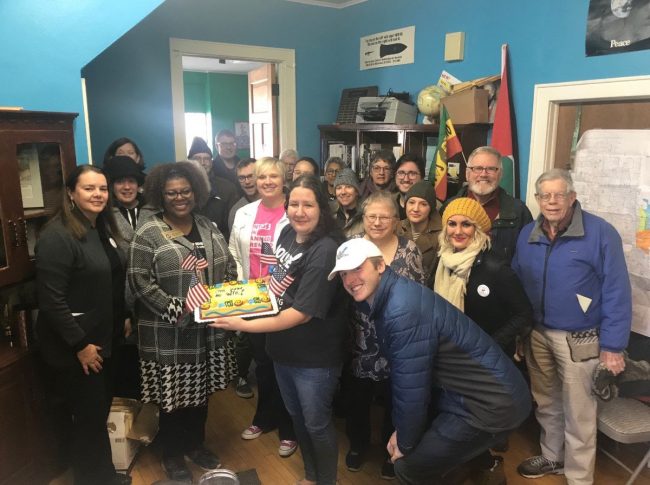 From their regional organizing director Davette Baker: “I really wish I could take credit for how awesome and amazing this team is but it’s really because of the amazing leadership they have in Mary Frank and Megan Holbrook. They are all stars because they understand the importance of grassroots efforts and they are great ambassadors of our messaging.  And honestly this team is always willing to go the extra mile to make sure the region is out knocking as many doors as possible!”

Thanks for being awesome, MKE Democratic Action team!

As we continue to hire, we will need to find places for our organizers to stay whether it is a few weeks when they hit the ground or through the election cycle. If you are interested in providing supporter housing, please fill out this link here.

Please pass it along to anyone who may be interested as well! If you have more questions about this, please let your Regional Organizing Director know. This is an incredibly important part of our program and its success; please consider signing up or encouraging others if you haven’t already! Accommodations will always be honored and no matter how long you are able to host, it is much appreciated and helpful. Housing is needed across the entire state, so please let us know if you have any questions at all!