Last week’s update overviewed the extraordinary success of the  #1Year2Win weekend of action. This week, our team gathered for a staff retreat—so our update will be a special look look forward.

If you’ve heard me speak in the last four months, you’ve probably heard me describe the Five Fights that will define our work. These collectively spell out the word WISCO. You can read more about each of these battles below. 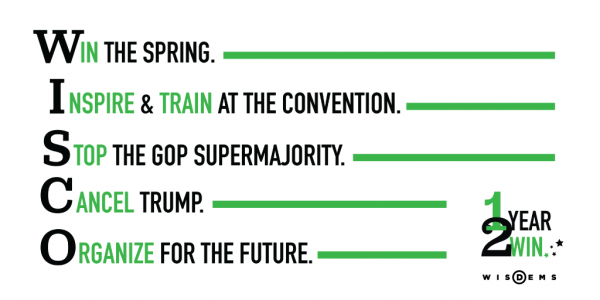 We’ll engage in all of these fights using our guiding values and philosophy, FIRE: Fight, Include, Respect, and Empower. 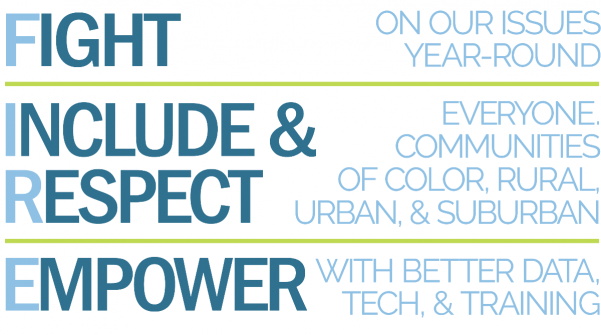 At our retreat, we zeroed in on discussed diversity and inclusion, and the crucial importance of engaging deeply across race, geography—from rural Wisconsin to inner-city Milwaukee—gender, ethnicity, sexual orientation, and all the other dimensions of our identity that the GOP tries to use to divide us, but that, in fact, can provide us with a tremendous source of strength as we work for a Wisconsin where everyone can thrive.

As our incoming executive director, Nellie Sires, put it, diversity without power is tokenism. It’s by building a big enough table and setting a place for everyone, and by sharing power so that everyone has a voice, that we can build a movement and a party strong enough to win.

So: with those values in mind, here are the Five Fights:

Fight One: Win the spring. April 7, 2020. Our next spring election will mark a critical race for a Wisconsin Supreme Court seat, local elections statewide—and our Democratic presidential primary. We’ll organize deeply for the spring, and test our organizing tactics and technology—to not only win our state and local elections, but also to strengthen our teams and inform our plans for the fall.

Thinking about running for office this spring? Check out our new site, Spring Forward, and register your interest!

And then we’ll organize and fight in northern Wisconsin in the May 12 Special Election for Wisconsin’s 7th Congressional District. If you haven’t seen Tricia Zunker’s new campaign launch video, take a moment to watch it now and share it on Twitter or Facebook. 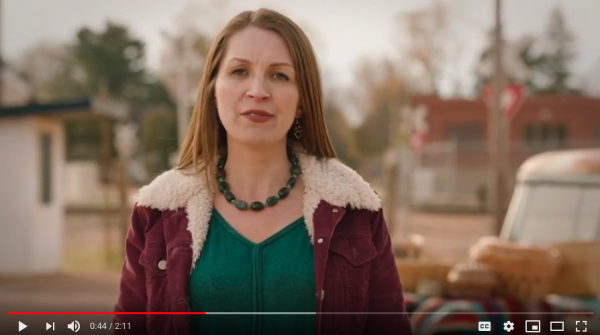 Fight Two: Inspire volunteers at the Democratic National Convention. July 13-16 2020. The convention in Milwaukee aims to recruit 15,000 volunteers. That makes it a massive organizing opportunity. We’re going to recruit thousands of convention volunteers and other attendees to undergo training in our field tactics and to make commitments to fight through the general election, and come out of the convention with a huge wave of energy to power us into the fall. Sign up to volunteer at the convention here!

Fight Three: Stop the GOP Supermajority. November 3, 2020. Our state legislature is so gerrymandered that, if Wisconsin Republicans flip three State Senate and three State Assembly seats, they’ll gain veto-overriding super-majorities—allowing them to turn state policy bright red and lock in gerrymandered maps until 2032. Preventing that nightmare lights an extra fire under our work. We’ll fight to protect our Senate and Assembly Dems, and we’ll go on offense all over the state.

Fight Four: Cancel Trump’s 2nd inaugural. November 3, 2020. Next fall’s presidential general election has already begun in Wisconsin. Trump is already pouring money into digital ads in our state, and his campaign is telling the press that they’re replicating the Obama-style neighborhood team model that is the basis of DPW’s program. Fortunately, we’re two years ahead of them. Without any statewide candidates on the ballot in the fall of 2020, it falls solely to our county parties and neighborhood teams to build the eventual nominee’s general election campaign in the nation’s most critical battleground state. That’s exactly what we’re doing. Thanks so much for being part of it!

Fight Five: Organize for the Future. November 4, 2020, into 2022—and beyond. Our neighborhood team model ensures that we end the election with local organizing strength all over Wisconsin—so that we’re in a strong position to fight in the elections to come.

In 2022, we’ll have new maps for the state Assembly, State Senate, and the US House; all of our statewide electeds will be up for reelection; and we’ll have a US Senate race. It will be all hands on deck… again. Our work this year will ensure that 2022 doesn’t look like 2010—and will move us towards our ultimate goal of making Wisconsin a blue trifecta state and passing the Democratic agenda into law, restoring democracy and changing people’s lives for the better.

That’s our plan. Thanks so much for being part of the Democratic Party of Wisconsin—and for all you’ll do to make it a reality. 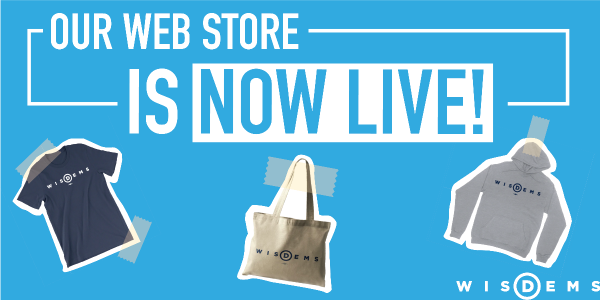 We’re excited to announce that the WisDems Store is now live!  Check out store.wisdems.org for our initial offering of WisDems logo t-shirts, hoodies and more. All products are union-made!