This week, Vice Chair Felesia Martin and I—and several other party leaders—traveled to Detroit for the Democratic primary debates. 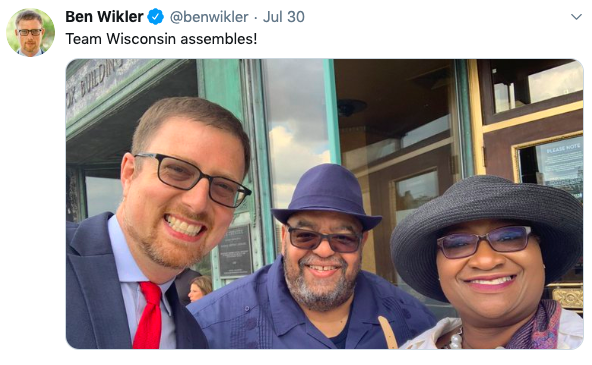 On stage, we saw 20 Democrats, any of whom would bring a sea-change improvement from the tsunami of disaster embodied by our current president.

But here’s the thing: By this time next year, 19 of those 20 candidates will not be the nominee.

And no matter who wins the primary, Wisconsin will still be Wisconsin. The tipping-point state in the electoral college.

Each of us has been given a superpower. Our actions will make a bigger difference in the presidential election than the actions of people in any other state in the country. At the debate, I spoke to dozens of national reporters about the centrality of our state—and they got it. As Edward-Isaac Dovere quoted me saying in The Atlantic:

“Democrats should expect an excruciatingly close, unbelievably hard-fought election that requires every possible hour and dollar and iota of energy. Even if the polling looks spectacular.”

To win here, we’ll need to bring the FIRE: Fight on issues, Include & Respect everyone, and Empower the grassroots. That’s what we’re doing at the Democratic Party of Wisconsin. Thank you for being a part of it.

This Wednesday, I was honored to address our Democratic Assembly caucus at their annual retreat in Madison. One topic we discussed stood out in particular: the fight for fair maps.

Thanks to Trump’s far-right appointments, the Supreme Court ruled this year that even the most extreme partisan gerrymandering won’t be declared unconstitutional. The brilliant legal battle waged from right here in Wisconsin has slammed into a wall. That leaves us with one critical priority: organizing.

The most immediate threat is that if the GOP wins three more seats in the state Assembly and Senate, they’ll gain supermajority status, and would be able to override Gov. Evers’s veto of the harshly gerrymandered maps they’re likely to draw after the census next year. So job one is winning state legislative elections in 2020—something that can only be achieved through people power, in every part of the state. 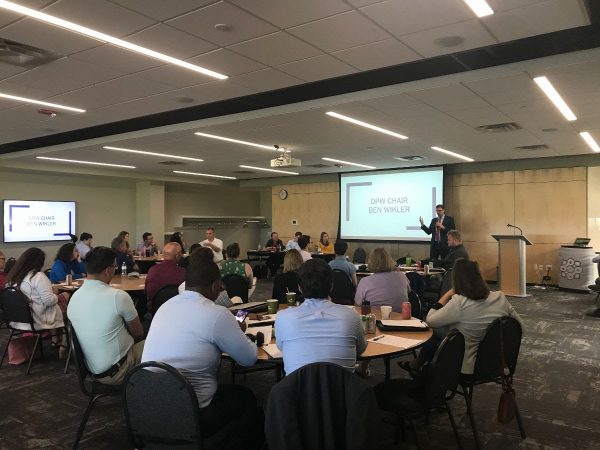 There’s another way that some think the GOP might try to lock in gerrymandered maps: using a joint resolution, which wouldn’t require the governor’s signature, rather than a bill that could be vetoed.

This would be illegal. The Wisconsin Supreme Court ruled unanimously against redistricting by joint resolution in 1964. But the Wisconsin Examiner reported this week that such a strategy is under consideration by the GOP, presumably because they think the operatives they’ve elected to the Supreme Court would be willing to smash law, precedent, and principle to help Republicans cling to power.

The Examiner story sparked a firestorm, and the GOP appeared to back off the plan—but it will keep intense public pressure to keep them at bay. Fortunately, grassroots activists across the state, from across the political spectrum, are fighting to pass fair maps resolutions in counties all across Wisconsin. The Democratic Party will stay involved in that fight, and you can get more involved at the Fair Maps for Wisconsin Summit, coming up this November 9 in Marshfield. Learn more at fairmaps4wisummit.com. As they say: “Pick your politicians – don’t let them pick up.”

And speaking of grassroots gatherings to unite activists and fight to pass county referenda to fix our democracy… don’t miss the 21st Century Political Reform Chautaqua coming up in Menominee this coming September 8 and 9. Get tickets here.

Include and Respect:
Hmong Community Festival in Wausau

On a gorgeous summer day last weekend, I had the pleasure of attending the Hmong Community Festival in Wausau. The Hmong Community in Wisconsin is a resilient group, and their numbers reach more than 50,000 in Wisconsin, the third-largest Hmong-American population after California and Minnesota. 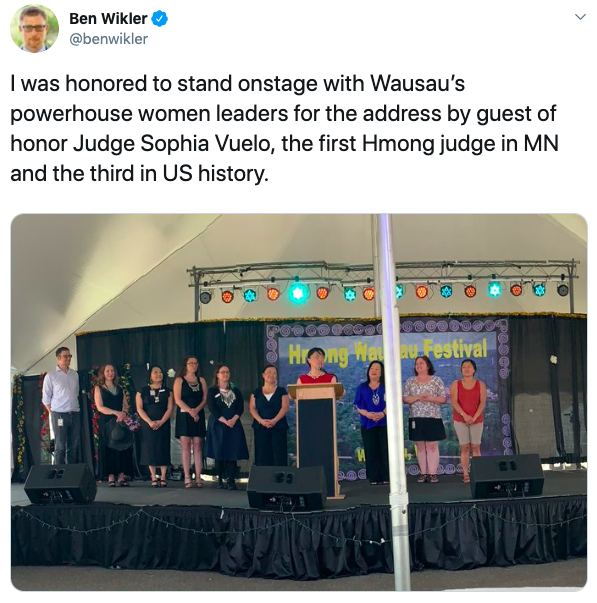 A number of Wausau’s Hmong political leaders spoke to the large crowd on Saturday, including Marathon County Board Supervisor and rising Democratic Party star Ka Lo. They spoke of the journey their community made as refugees in our nation, that though they faced aggression and racism when they first took asylum in our nation, now they are elected officials and leaders in their communities.

There’s of course still work to do. But Wausau’s rising cohort of Hmong political leaders, entrepreneurs, and professionals are a reminder that fears and stereotypes leveled at today’s refugees will one day be discredited as obvious slanders as well.

This week we were reminded of just how important it is that we take steps to be inclusive of all members of our party, and how dire the consequences are if we don’t.

Our amazing state rep Jimmy Anderson from Fitchburg, who uses a wheelchair, asked Speaker Vos a reasonable request — to be allowed to phone in to committee hearings when his health prevents him from attending in-person. Vos callously said no, claiming it would be “disrespectful” to people attending the hearing for Jimmy to call in.

What’s actually disrespectful is Robin Vos denying Rep. Anderson’s request for reasonable accommodation, which he is guaranteed by law under the American Disabilities Act. It’s shameful, unacceptable, and indicative of how little the GOP cares about the full inclusion of all Wisconsinites.

Vos has caved slightly on the accommodations he’s willing to offer Rep. Anderson. It’s still not enough, but the pressure is working, and we have to keep it up.

Empower the Grassroots: Thanks, Organizing Corps! 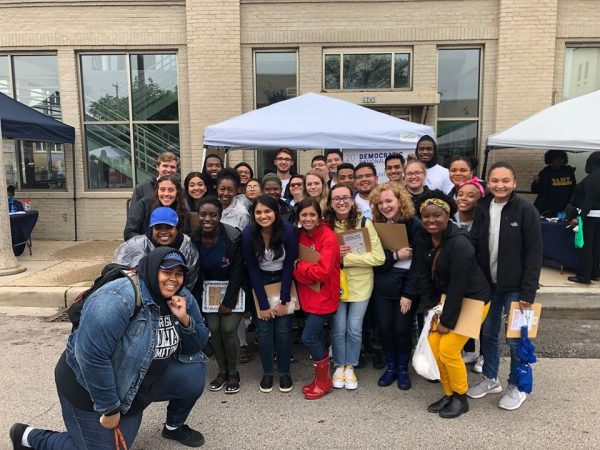 After 8 weeks of daily, intense organizing, our 2020 Organizing Corps fellows are leaving Milwaukee to go back to school. They wrapped up their summer with a remarkable weekend of action in Milwaukee. Over the last 8 weeks, they collectively knocked on the doors of over 20,000 Milwaukee residents. That’s more than 2% of the city’s population.

But they’re not stopping there. We are going to continue to engage our fellows so that they come back (and want to come back), and help us win the presidency next summer after they graduate.

I’m so proud of all of these young leaders, and I can’t wait to see the work they accomplish the rest of the year. Thank you again to our amazing cohort!

The stakes for 2020 couldn’t be higher — that’s why we’re adding two new regional field directors to our field program in order to build a program that gets us through 2020 and beyond. Ethan will organize in the WOW counties and Jackie will organize South Milwaukee. We’ll also be hiring a Rural Outreach Coordinator and a Youth Director to mobilize college students soon! Our coalition is vast and diverse and we’re committed to turnout out every vote, from Superior to Beloit! 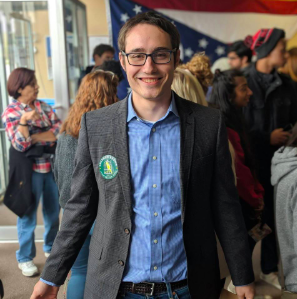 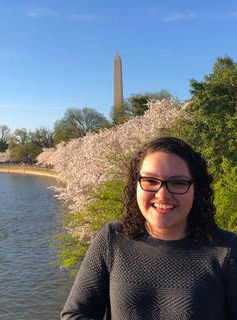 Welcome Ethan and Jackie to the team!

Last Sunday I went to the Dane Dems’ annual summer picnic. I was able to talk with Madison’s new mayor Satya Rhodes-Conway and with my congressman Mark Pocan! And thank you so much Mike Basford, the Dane Dems outgoing Chair, for your hard work, dedication, and time you have put into the county’s organizing. We will miss you!