That clock you hear ticking? It’s the one-year countdown to the Democratic National Convention in Milwaukee.

What we do here in Wisconsin during this next year could well determine the outcome of the presidential election—and the future of Wisconsin, the country, and the world.

We marked that one-year pre-anniversary with a blitz of activity—including a Cheddar Bomb!—which you can read about below. Throughout this year, we’ll be guided by our FIRE vision: Fight on our issues, Include and Respect everyone, and Empower the grassroots. Thanks for being part of this fight. 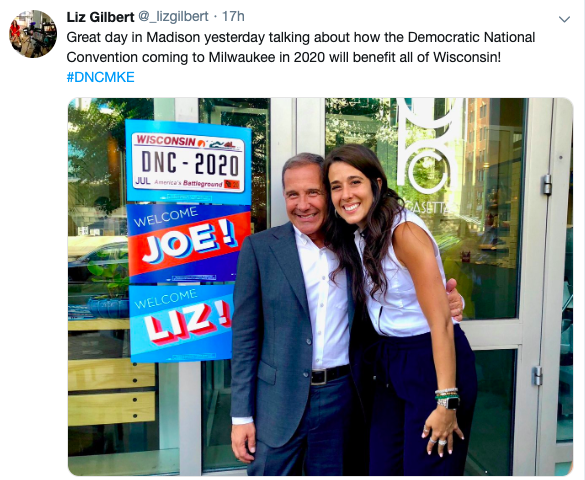 We were so lucky to welcome Joe Solmonese and Liz Gilbert, the CEO of the 2020 Democratic National Convention Committee and President of the Milwaukee host committee, to our office this week! We officially welcomed the team at a reception on Tuesday evening where Gov. Evers, AG Josh Kaul, Treasurer Sarah Godlewski, Mayor Tom Barrett and a slew of other Democratic elected officials graciously joined us.

We couldn’t be more excited to work with Liz and Joe and the entire committee staff over the next year! The 2020 convention will be a once-in-a-lifetime opportunity for us to put Wisconsin on a national stage, and we hope that the thousands and thousands of volunteers we recruit for convention will go on to help us elect Democrats up and down the ballot in November 2020. 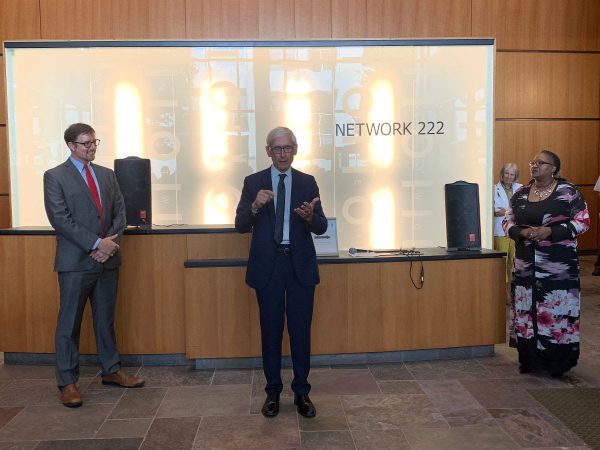 Gov. Evers speaking to the crowd of attendees at our DNC Welcome Reception!

In addition to hosting the 2020 National Convention, Wisconsin will play a pivotal role in determining who wins the presidency — Josh Marshall at Talking Points Memo said “the entire election probably comes down to who wins Wisconsin.” People across the nation are beginning to understand just how important what happens here in Wisconsin will be.

If we’re going to deliver Wisconsin and its 10 electoral votes to our future Democratic presidential nominee, we have to start building a grassroots juggernaut TODAY.

That’s why we launched a #CHEDDARBOMB last week to raise the resources to grow and sustain our statewide organizing program. 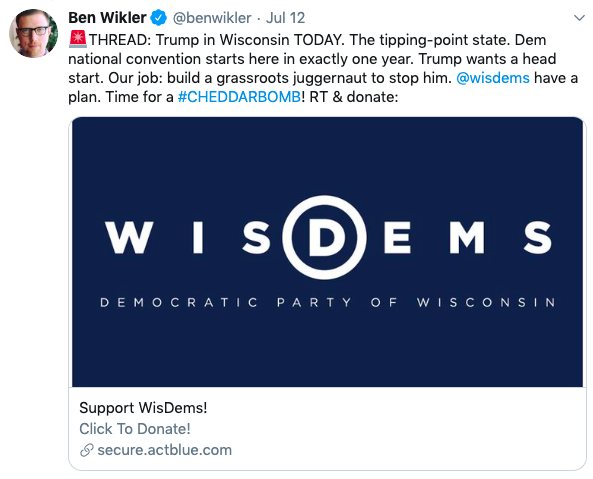 Our #CHEDDARBOMB was a huge success — we received over $75k in donations on social media from over 2,000 individual donors! (And, we had a few notable celebrity shout outs!) To all the grassroots organizers who helped spread this message across the internet like wildfire, we can’t thank you enough. Our strongest resource is our people, and it’s our people power that’s going to push us across the finish line on November 3, 2020. 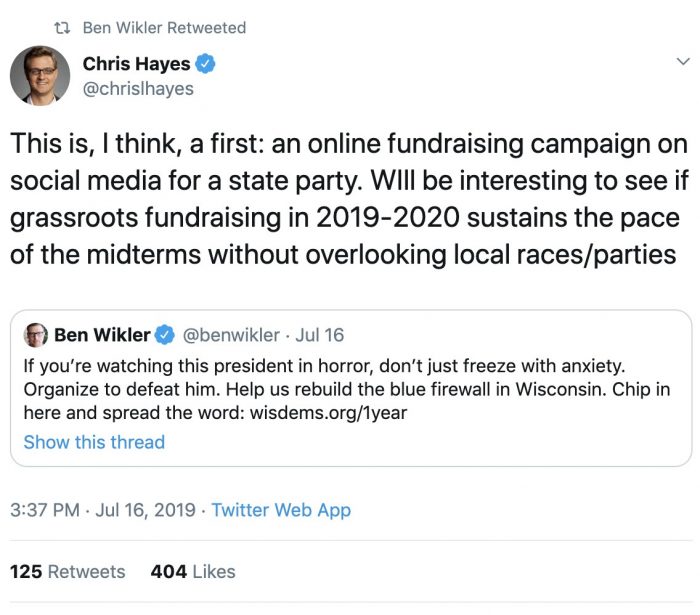 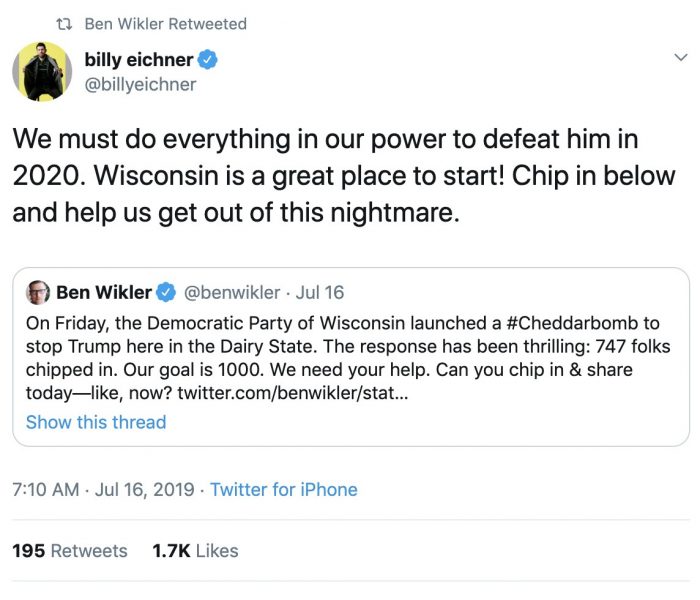 Trump likes to brag and boast about the state of our economy, but if he spent any time at all talking to everyday Wisconsinites, he’d see that the rosy picture he paints of our economy does not reflect the reality of lower and middle-income people.

DNC Chairman Tom Perez, Milwaukee Mayor Tom Barrett, DPW Vice Chair Felesia Martin and I addressed Trump’s broken economic promises at a press conference on Thursday in Milwaukee. We were fortunate to be joined by Bob Willis, Sarah Lloyd and Mike Bernstein — Wisconsinites who spoke to the struggles our state faces in the dairy industry and with rising health care costs in Trump’s economy. 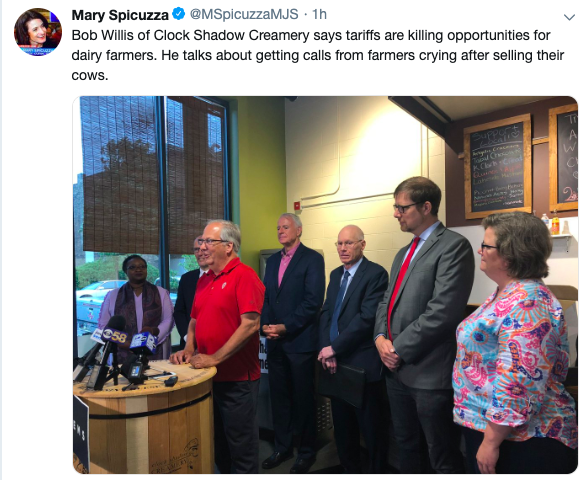 Trump promised to lower taxes for the middle class. Instead his tax cut gives massive handouts the rich and powerful at the expense of everyone else.

Trump promised to bring jobs back to Wisconsin and stop outsourcing. Instead, his reckless trade war has accelerated the crisis in Wisconsin’s dairy industry. We lost 700 dairy farms just last year. His tax bill has directly incentivized companies to outsource, and that’s just what they’ve done. 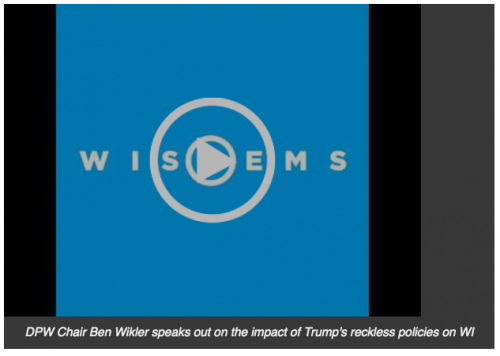 At a time when wages are stagnant and income inequality skyrockets, it’s incumbent upon us Democrats to fight against Trump’s economic agenda that helps him and no one else, and fight for the right of every American to live a life free of poverty and full of economic opportunity.

Last week marked the beginning of oral arguments in the Trump-GOP lawsuit to repeal the Affordable Care Act, a move that would rip healthcare coverage from millions of Americans and Wisconsinites.

Sound familiar? That’s because we’ve been here before. Whether they’re blocking the will of the people by refusing to expand Medicaid or passing laws in the middle of the night to take power from democratically-elected officials, Republicans have been obsessed with taking away our health care by any means possible for nearly a decade. 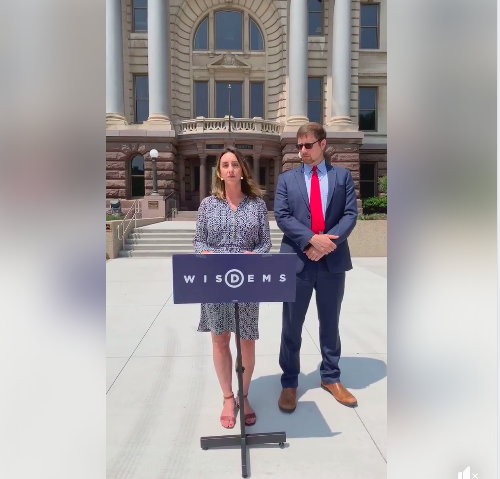 Last Tuesday Second Vice Chair Lee Snodgrass and I held a press conference in Green Bay to stand up for our health care and make our voices heard. A repeal of the ACA would be catastrophic for Wisconsin families — 2.4 million Wisconsinites with pre-existing conditions would lose critical protections that prevent insurers from denying them care.

With Trump moving ahead with this lawsuit, health care is now on the ballot in 2020. When Wisconsinites go to the polls in 2020, they will know who stood up for their health care and who spearheaded efforts to rip their care away.

Before we celebrated the Fourth of July, Democrats were hard at work all around the state for our Weekend of Action on Medicaid Expansion! We talked to thousands of voters in Republican districts to let them know what is at stake — that their legislators are flushing our tax dollars down the toilet by refusing Medicaid expansion.

It was also a great opportunity to see our Organizing Corps. 2020 Milwaukee cohort in action! 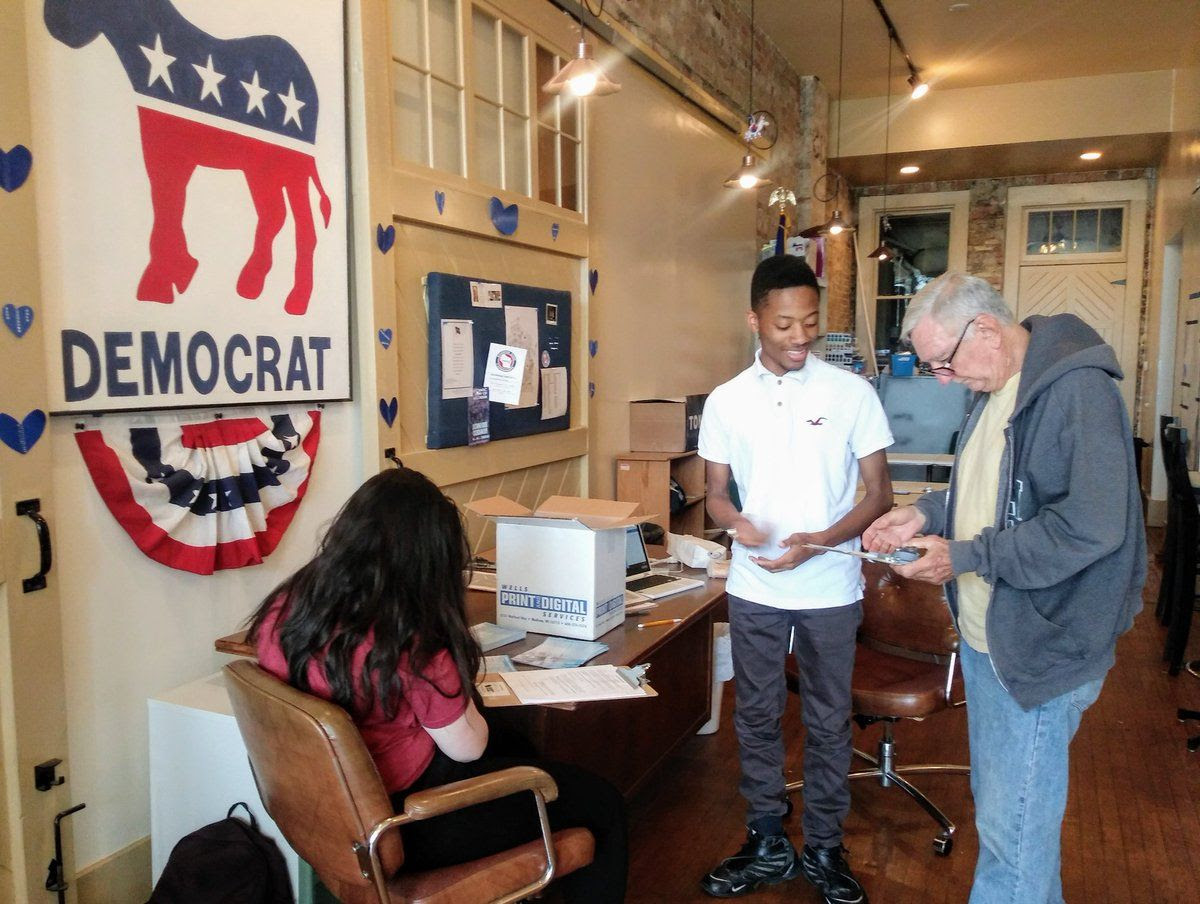 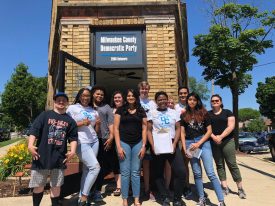 While Medicaid Expansion didn’t make it into the state budget, the fight isn’t over. We will continue to empower our grassroots organizers and keep up the pressure on Republican legislators.

Include & Respect
Listening to ALL Wisconsinites 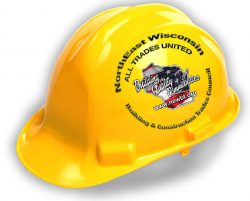 Lee and I met with the NorthEast Wisconsin Building and Construction Trades Council in Appleton, last Tuesday. It was a privilege to learn more about the issues affecting Wisconsin workers in northeastern Wisconsin. Our state needs to continue to invest in good paying jobs that support our all communities!

One of my favorite parts of this job is traveling throughout Wisconsin and meeting new Democrats. Every voter has a story, and it’s our job to listen. We can’t leave any Wisconsinite or any voter behind, whether it is a big election year like 2020 or during the off-year. Your voice matters, and Democrats are committed to listening. 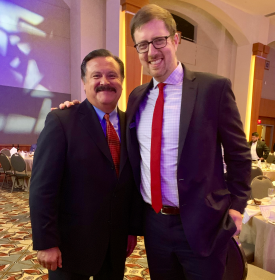 Additionally, I’m thrilled I was able to join DPW Latino Caucus Chair Carmen Cabrera at the 90th LULAC National Convention in Milwaukee! LULAC is the nation’s oldest Hispanic civil rights organization. At a time when so many human rights atrocities are being waged against Latin American immigrants and asylum seekers at our southern border, it’s crucial we stand together with organizations like LULAC as we fight for the rights of our Latin-American friends and neighbors.

Several of our presidential candidates joined LULAC on Thursday evening for a presidential town hall. Gov. Evers also addressed the convention Wednesday evening, emphasizing his proposal to provide undocumented people in Wisconsin with driver’s licenses, an issue that Latinx activists have been advocating for for years. 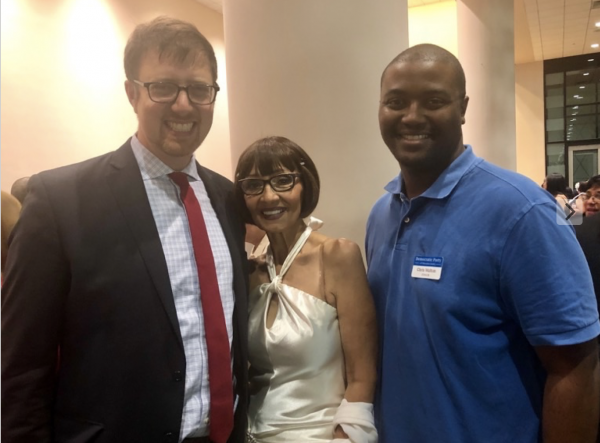 Our Democratic coalition is a vibrant tapestry. If we’re going to win in 2020, we need to not only show up and listen, but also include all the communities of our party in the fight ahead. 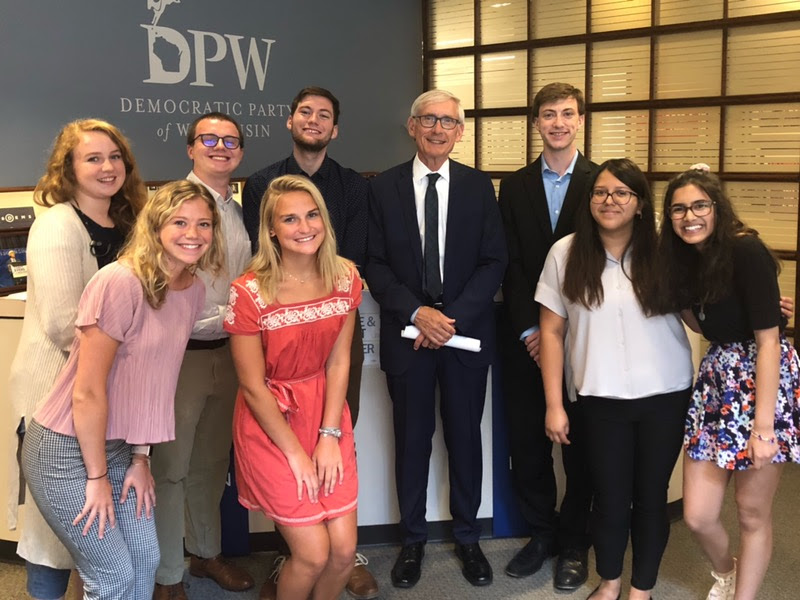 DPW interns had the opportunity to meet Gov. Tony Evers this week! 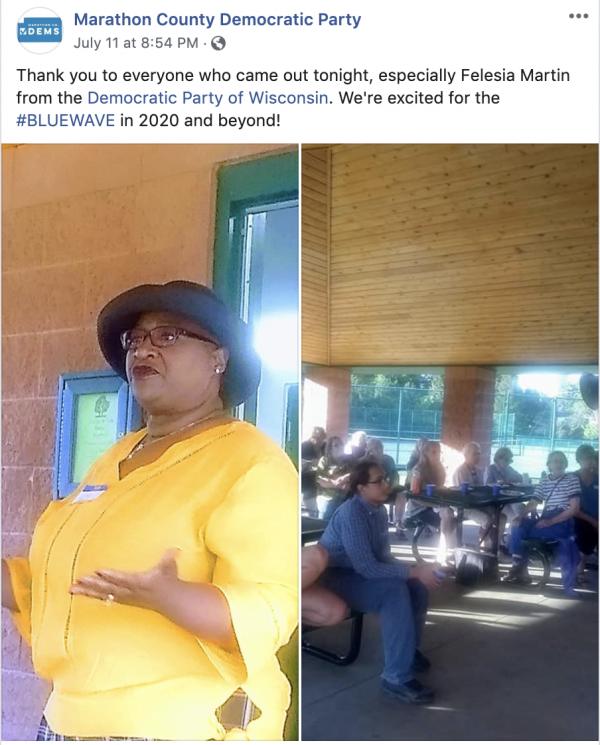 I had the opportunity last week to meet with MoveOn’s chief technology officer at Netroots Nation to discuss an exciting new project. We want to implement MoveOn’s texting program, Spoke, at the Democratic Party of Wisconsin. We will keep you updated as this project develops!